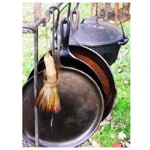 There are many different styles of cast iron cookware that you can choose from that allow for a wide array of cooking styles. Whether you are planning on cooking a stew over an open camp fire or baking your favorite casserole in your oven, cast iron cookware is always a great choice. Choosing the cast iron cookware for your kitchen requires the buyer to determine what their cooking needs are. While many people are comfortable with the standard, skillet, griddle and dutch oven, more and more people are realizing the complete versatility they create by adding other varieties of cast iron cookware.

Welcome to the BBQGuys.com Family!

You are now subscribed to receive our newsletters and special offers straight to your inbox at the email address you provided, . You will receive an email with instructions to edit and update your subscription preferences.