Oops, you forgot to give your new list a title.

This product is already in the list you selected.
Try another product or choose a different list.

A problem occurred while adding this item to your list. Please refresh the page and try again.

Book a professional to help assemble this grill for only $99. All bookings and inquiries are handled by Handy.

Get ready to Taste Victory! The Victory pellet grill is designed to beat the competition at their own game, from delicious wood-fired flavor to helpful features every griller needs for a winning BBQ.

This is a grill you can always count on thanks to the tough, 16-gauge, powder-coated steel body, not to mention the included front and side shelves that the competition often sells separately. Victory secures another win with its 936 square inches of total cooking area, the most in its class. With 691 square inches of primary grilling space and another 245 from the upper warming rack, you can comfortably cook for the whole family and celebrate victories big and small.

The grill wins in a variety of ways, whether cruising as low as 180F for low-and-slow smoking or roaring to 500F for perfect wood-fired grilling. Regardless of your setting, the Digital PID Controller will maintain steady temperatures for the duration of the cook with no effort on your part.

Easy to Use with Plenty of Pellet Capacity

Startup is equally hassle-free; just turn the grill on, set the control knob to Smoke, and leave the lid open. While on this setting, the heavy-duty auger continuously feeds pellets into the fire pot for 6 minutes to get the grill going. The control panel also features 2 ports for a pair of included stainless steel meat probes, vital tools for removing the guesswork from grilling. The next triumph to tally is the extra-large pellet hopper that can hold 29 lbs. of fuel, easily the biggest capacity in this pellet-grill class. That means you can let the grill run all day without the need to babysit or add more pellets.

Flavor Flexibility and a Functional Cart

Should you choose to change fuel flavors, the back of the hopper includes a pellet-release feature for easy swapping. The Victory pellet grill features 3 stainless steel tool hooks for your convenience. Its sturdy steel cart, meanwhile, has 2 heavy-duty polyurethane wheels along with 2 locking caster wheels for smooth rolling around the patio or backyard. Add it all together, and the Victory pellet grill is the clear winner among its peers and the top choice for those who want to Taste Victory. 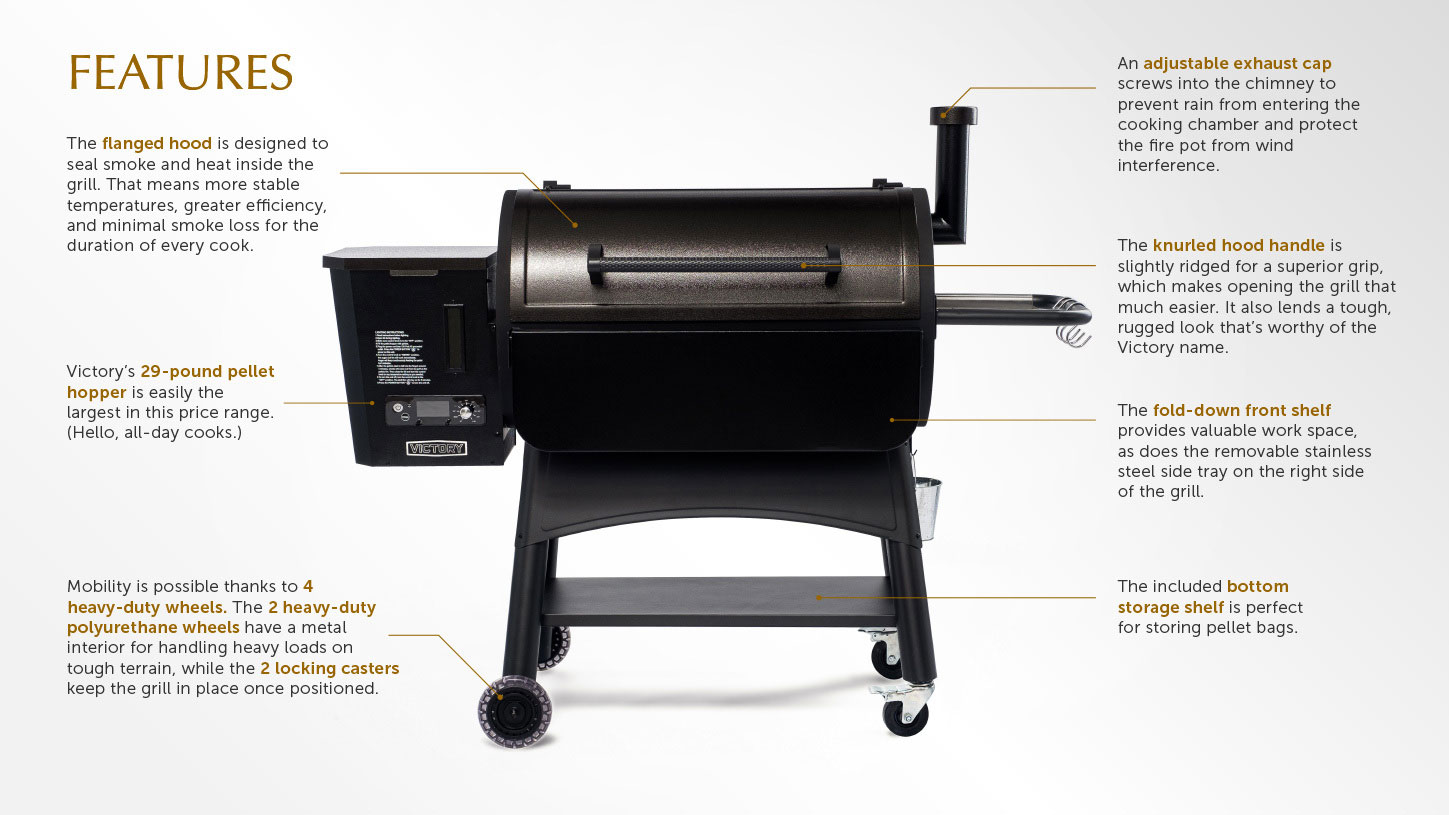 Product packaging, owners’ manuals, installation instructions, and/or operating instructions may include more information than what is shown on our website. The content on our site is intended to be used for reference purposes only. Please fully read all included manuals and documentation before installing or using this product. WARNING for California residents: this product may contain chemical(s) known to the state of California to cause birth defects, cancer, or other reproductive harm.

Ask an Expert
Buy with confidence.
Contact our experts today.

Victory warranties this pellet grill to be free from defects in manufacturing and workmanship under normal residential use and conditions for a period of three (3) years from the date of original purchase. Labor not included.

90% of reviews recommend this product

By Team BBQGuys
Experts in Grills and Outdoor Kitchens for over 20 years
Over a million customers helped
The Skinny:

Reviewing the Victory pellet grill feels a lot like listening to a favorite classic album on its original vinyl release: everything about it is just better. This is what pellet smoking is supposed to feel like. Every note lands exactly where we want them. Everything about the composition screams quality. Get it going, and you’ll have a timeless experience rife for years of enjoying the moments that matter with loved ones. If you’re in the market for a pellet smoker beneath the $700 price tag, let’s cut right to the point — this is it.

To get all the proof we needed, we asked Chef Tony to perform a thorough and objective review of the Victory pellet grill as if it was from any other manufacturer. That included his usual repertoire of numerical and real-world tests to evaluate the grill’s quality, performance, and features, which combine to give us an overall picture of a product’s value. It’s the same treatment he’d give any other pellet grill, so buckle up and read on to see what our resident grill tester discovered.

Grab your nearest clipboard and prepare to mark off a lot of checkboxes, because this pellet smoker was designed to meet or chew up the expected industry standards for this price point. 16-gauge, powder-coated steel body and cart with a 14-gauge hood? Check. Standard 3-year warranty on the grill body and 3 months on the electronic components? Check. Rock-solid, 7mm porcelain-enameled steel cooking grates? Check. Both the Full-Coverage Diverter Plate and fire pot protector are built using 12-gauge, cold-rolled steel for durability. “It’s one of the sturdiest I’ve seen in the class, for sure,” Chef Tony says of the fire pot protector. “Which is a good idea, considering that this is the grill’s component that will take the most abuse by far.” Meanwhile, the removable side tray and tool hooks located on the right side of the grill are made from stainless steel. So far? Impressive.

First and foremost, the Victory pellet grill smokes quickly, and it smokes in huge amounts. “Initially, you may think you’ve done something wrong,” Chef Tony quips. “That’s how much smoke this grill produces at times.” The flavorful smoke output should be celebrated, but we wanted to know just how evenly the smoke and heat are distributed across Victory’s cooking surface. To find out, Chef Tony placed thermocouples throughout the grill to measure average temperatures. On Smoke Mode (180°F), the average came in at 174°F, with the furthest individual readout just 19°F lower than that — “great” for an Entry-Level pellet grill. The high-heat test at 500°F produced similarly consistent results: an average temperature of 469°F after 15 minutes of preheating, 490°F at 20 minutes, and a maximum variance of 31°F from the average. Any thoughts, Chef Tony? “This is good for a pellet grill, or even probably as good — if not better — than most home ovens.”

Expect included shelves, intelligent and razor-sharp PID control, and the biggest pellet hopper in the game — at a whopping 29 pounds.

But the feature list is where Victory claims the biggest win against its main competitor, the equally-priced Traeger Pro 34. While Traeger’s front shelf is available separately as a not-insignificant upsell, Victory’s shelves (yes, plural) arrive right there in that first big package. The fold-down front shelf and removable, stainless steel side tray provide valuable work space; look forward to the bottom storage shelf (perfect for pellet bags) and those 3 removable, washable tool hooks. Neither of these latter two are available on the Traeger Pro 34. Chalk that up as another win for the Victory pellet grill.

The Victory pellet grill’s power cord is rated for 120 volts/15 amps, meaning it can be plugged into standard outlets. No hardwiring or special circuit necessary — which is certainly a boon to the pellet veteran. An adjustable exhaust cap screws into the chimney to prevent rain from entering the cooking chamber, while protecting the fire pot from baleful wind interference that might cause random temperature swings during long cooks. Finally, Chef Tony found that the flanged hood indeed traps large portions of valuable heat and smoke inside the grill, leading to more flavorful results in his many food tests.

From solid construction and mighty operation to its feature count, Victory delivers the best overall experience for the money among Entry-Level pellet grills.

Tally it up all together, and what do you get? A pellet grill that will drink (and efficiently use) every pellet in sight, provide jaw-droppingly long smoking sessions, babysit its own temperatures, bathe everything inside in a thick layer of flavorful smoke, and has successfully laughed at two out of two hurricanes.

Slam all of this together in a hefty design that’s nimble on its wheels with industry-leading features… and then slap an Entry-level price tag on the box. We’re not trying to be in the business of calling a clear victor in this class of the pellet grill market, but let’s not kid ourselves — it’s even in the name. Why don’t you put a bow on this review, Chef Tony? “If you’ve been considering adding a pellet grill to your collection of grilling gear, then you should definitely consider the Victory pellet grill.”

Free Shipping on orders over $49

Ship your entire order to your home for free, especially the big stuff! *Continental US only

When will my item arrive?

Once shipped, items usually arrive within 3-5 business days. While UPS and FedEx are our carriers for smaller items, be aware that larger items and orders are shipped via freight. The freight process is a bit more complicated than what we’ve all come to expect for small parcels, so it’s important that you’re prepared and understand what’s required of you well before delivery day.

For carriers that schedule delivery appointments:

Carriers that schedule delivery appointments require you to be home for delivery and provide your signature. The delivery is made with a semi-truck with lift gate services, and the shipment is dropped off at the curb. If you authorize the shipping company to leave the delivery without a signature, BBQGuys can’t be held responsible for damages that occur during delivery. As complicated as this process may seem, we’ve only scratched the surface here — please review our detailed guide to freight delivery so there are no surprises when a freight shipment heads your way.

For carriers that deliver without an appointment:

Carriers that deliver without an appointment don’t require you to be home or set up a delivery window, and you aren’t required to sign for the pallet(s). Instead of scheduling an appointment, arranging your schedule to be home for the delivery, and signing to confirm receipt, you can sit back and let your items come to you. If you’re home at the time of the drop-off, you can request the driver place your delivery in the garage; if you’re out of the house, the driver will leave it near the garage or doorstep.

This item leaves our warehouse within 24 Hours

Anything under $49 ships at one low price. If your order increases, your shipping stays the same!

Return all new, unused, and unassembled items in their original packaging, and we'll give you a full refund minus the cost of the original AND return shipping.

Most companies charge a restocking fee. We just don't do business that way.

Message to our customers: Like all retailers and manufacturers, we’re currently experiencing well-publicized supply-chain issues and steel shortages that have caused some orders to be delayed. We sincerely apologize for any inconveniences arising from this situation, and we assure you we’re making every effort to solve these problems with our vendors and logistical partners.

So, why are some orders being affected? Major ports around the world are still operating at reduced capacity because of COVID-19 restrictions — on average, container boats sit at port for about 3 weeks before being unloaded. Combine these shipping inefficiencies with a scarcity of natural resources, and virtually every industry has been crippled to some degree. Yet we acknowledge that it’s our duty to meet these challenges head-on and work toward solutions so you can enjoy more time outdoors with the people you love. We appreciate your patience as we strive to smooth out our supply chain, and we thank you for choosing us for your grilling and outdoor living needs.

Temporarily Out of Stock

Send us your email and we'll notify you when this product is back in stock.

We will notify you when this product becomes available.

Your Shopping History. Pick up where you left off.

Product Name Not Found
000Current price $0.00
Leaves our
warehouse in