Convection is the transfer of heat within a liquid or a gas. Convection is a mode of heat transfer which includes the movement of the molecules of the material. It is only observed in liquids and gases as it is not possible in solids because the molecules in solids are packed so tightly that they are not able to move freely.

Why Is Convection Cooking More Efficient?

When it comes to cooking with convection technology, you will see a uniform temperature that is created with internal fans that circulate the hot air. The fans within a convection style cooker ensure that the same temperature reaches both the top and the bottom of the foods being cooked as well as the foods on the various height racks. Being that convection barbecue grills, ovens and microwaves can cook food faster, at a lower temperature and often with better results, they tend to be a little bit more expensive but you are definitely getting a bang for your buck!

Instead of letting hot air randomly circulate throughout your cooker, the convection cooking will make each meal more enjoyable without the radiant heat scorching the food bottom and making the tops unevenly browned. The reason for these inconsistencies is that the temperature provided with a conventional cooker does not remain the same over the course of preparing your meal. With the fan circulated hot air provided within a convection style cooker the temperature variations will be corrected which means no more hassle of something being too done on the outside and not quite done in the middle.

Cooking With A Convection Appliance

Learning how to cook with your new convection oven is something that comes with trying out a few of your favorite recipes. Cooking with a convection style oven usually takes three -fourths of the time a standard conventional cooker would take. Your homemade lasagna recipe can be adjusted in 2 ways. You can lower the oven's temperature by about 25 degrees or shorten the actual cooking time by roughly a quarter. Through trial and error, you will quickly get a sense of how your convection cooker cooks and what other adjustments can or should be made to ensure a perfect home cooked meal. 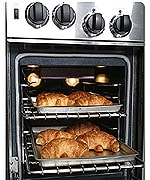 Convection: - The convection style ovens use the internal fan, which is usually located in the back of the oven cavity. This fan forces the heated air around the oven, circulating it around the item being cooked. With convection cooking, you can save an average of 20 percent of the foods normal cooking time. Not only are convection ovens more efficient and speedier but it can cook can also thoroughly cook food at a lower temperatures, keeping meats moist and tender. 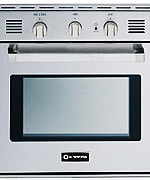 Conventional: - Traditionally, most homes in the US come with the standard conventional style oven. As they are the most common ovens, for years before people have used these cookers to cook all sorts of meals including desserts and baking breads. The conventional ovens are similar to the convection cookers as they both use heat to cook. The main difference between the 2 types of units is the fan on the back oven wall in the convection oven. With conventional cooking, the heat circulation can be blocked by pots and pans inside the oven, causing the heat to not be evenly distributed.

There are pros and cons to both styles of cookers. Conventional ovens have been around for many years, serving people and the foods cooked have been successful. Convection ovens while having many fans, the ovens are sometimes hard to get used to.

Welcome to the BBQGuys.com Family!

You are now subscribed to receive our newsletters and special offers straight to your inbox at the email address you provided, . You will receive an email with instructions to edit and update your subscription preferences.